Generation 0.5 (0.5世代, 0.5 Sedai, alt. Zero Point Five Generation) was an Object developed by a military nation in Oceania.[1] It's Elite was the leader of the Oceanian dictatorship.

The spherical main body of the Generation 0.5 has multiple large constructions attached to it. It has an X-shaped propulsion device attached to the bottom and giant building-like masses attached to the back of the sphere like wings, used to release the excess energy created by the reactor that is so hard to control with its level of technology.

A single main gun is attached to the left side of the sphere. It's a few dozen meters long and reinforced with numerous steel bridge-like wires.[2] It has about 70 secondary weapons.

The technology level of the Oceanian military nation is not high enough to actually build a proper Object, thus the codename of Generation 0.5. Normally an Object’s reactor is like a nuclear reactor or a blast furnace in that it is more efficient to keep it running constantly rather than switching it on and off. However, the Generation 0.5 is too weak. If it kept its reactor running for long periods of time, its inner parts could fuse. As such, its reactor is usually kept off and it takes between 4 and 5 hours for it to be turned up and its revolution speed to let it move around.[3] Its armor was also considered weak enough a nuclear warhead might be enough to destroy it.[1]

After it began moving a lot sooner than expected Quenser speculated that the Generation 0.5 had used an electric booster to force up the temperature of the reactor. This is the opposite of the Information Alliance Objects that have electrical outlets and similar to the ignition of a gasoline engine. By pouring in a large amount of external electricity, the Object’s internal laser emitters can be forcibly activated. However, this is reckless, and combined with the low-tech level of their Object it caused a small explosion on the maintenance base's amplifier.[2] The Generation 0.5 moves using around 500 steel wheels to distribute its weight. [4]

Its main cannon is a coilgun capable of rapid-fire, but its low-tech level means it can't shoot for long periods of time without the cannon's barrel burning away. It also lacks the usual Object sensors and uses normal cameras on each gun to aim. This means even normal camouflage can hide a soldier from it.[5] After its cameras were blinded with mud, it showed it could clean them by waiting for the mud to dry and then repelling it with a negative electrical charge.[4]

Its main coilgun is affixed to the main body with several steel wires. It would likely have been fine without them, but there is a risk of the cannon damaging itself with its own weight while it's held horizontal for long periods of time. This is a cheap countermeasure that would never have even been considered for a normal Object. In exchange for the stability, affixing the main cannon like this robs it of almost all ability to move it independently. For any small adjustments to its aim, the entire Object has to move.[2]

The coalition of the four world powers supported the indigenous Oceanian tribes in their conflict against the military dictatorship and their Forest Conservation project. Because of the clear fact that their Object would be destroyed the moment it tried to enter open conflict with the more numerous and advanced Objects of the coalition, the dictatorship hid the Generation 0.5 in a secret base and created several fake bases and fake Objects as dummies.

After their plan of having a village massacre by their soldiers recorded by international media as a show of strength failed, the dictatorship moved to the next step: using their Object to destroy a village. Of course, despite being incredibly inferior to the Objects used by the main world powers the village would still be powerless against it. The leaders of the coalition chose to wait until the Generation 0.5 had destroyed the village so that they would be able to locate it and track it with their satellites.

The military nation, aware that the coalition's satellites would track the energy signature of the Object once its reactor started powering up set up a decoy using a prototype reactor in the Great Sandy Desert while the true Object started up its reactor in the Tanami Desert.

Quenser and Heivia snuck out of their base and arrived at the secret base on the Tanami Desert just as the Object finished starting up 2 hours sooner than they expected, thanks to its electric booster technology. However, this method was not entirely without issues as it caused a small explosion in the base's amplifier, killing all of its maintenance team.

Since it was the fist time it was being used since being built 2 years before, the military leader had to perform weapon tests and refamiliarize himself with the controls. Quenser and Heivia used this chance to analyze it and search for a weakness, leading to the discovery of the hatch used for the electrical booster device with its power cable hanging around.[7]

After entering the main base and discovering the destroyed transformer, Quenser came up with the idea of overloading the unstable reactor with another surge of electricity using the broken hatch. He tried to blow up a water tank in a tower that turned out to be empty. However, the fallen tower hit the main water pipeline used by the maintenance base. The water connected the power cable hanging of the Generation 0.5 and the capacitors of the base and the electrical surge overloaded its reactor and blew it up.[8][7]

The prologue and afterword confirm that the Generation 0.5 was a degraded version of the Information Alliance's Gatling 033. The technology and design were given to the Oceanian military nation by the MIB.[9] 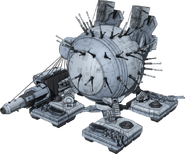 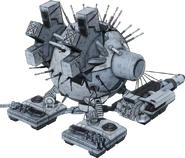 Rear view of the Generation 0.5

Bottom view of the Generation 0.5

Generation 0.5's specifications
Add a photo to this gallery

Retrieved from "https://heavyobject.fandom.com/wiki/Generation_0.5?oldid=11152"
Community content is available under CC-BY-SA unless otherwise noted.