This article is a stub. You can help Heavy Object Wiki by expanding it.

The Gatling 033 is made up of a spherical main body with a cross-shaped float and treads located directly below that. The floats extend to the front, back, left, and right. The two to the left and the right each have a rapid fire beam cannon Gatling gun installed on the top of the end. It has over 100 cannons, both large and small, but it does not have all that many on the side. It has almost 20 smaller cannons on each side. This is likely to give priority to the main cannons.[2]

The cockpit is a sphere of about 2 meters across with a giant monitor attached to the front. A large number of keyboards are lined up on three stepped levels. The third step spreads out in a U-shape around the edge of the cockpit. In the space not taken up by keyboards, an inscription reads “Manual Interface ‘JULIET’.[3]

Its 35-meter main guns are made up of five giant rapid fire beam cannons linked together like a Gatling gun. A rapid fire beam cannon is a powerful beam cannon that fires continuously at extremely short intervals. These gatling guns can fire thousands or tens of thousands of beams per minute,[6][7] with every shot having enough firepower to melt a warship into an orange puddle.[8] The reason it's necessary to construct a Gatling gun-like device when the weapons fire beams rather than metal bullets is that the powerful beam weapons will damage their barrels and other equipment if fired at too short an interval. Also, it uses large amplifiers to instantaneously amplify and release electric power, so it's important to switch on and off in short intervals to divide up the burden on each individual cannon.[4] Even with the gatling configuration, the main cannons can only shoot for 30 seconds before having to cool down. Each cannon can rotate enough to cover 180 degrees.[9] These weapons are overwhelming at close range, but can't be aimed precisely at distant targets.

Besides its standard main and secondary weapons, the Gatling 033 also possesses a countermeasure against underwater targets, consisting in releasing several metal dice from the bottom of the Object into the ocean. The dice look tiny compared to the Object, but each one is the size of an air cargo container, and they are loaded with explosives. The dice can detect the artificial sounds in the ocean that do not exist in the natural world and they can compare them to the sound patterns of the propellers registered to their own army. Any that do not match will be deemed an enemy and the deadly fish eggs will be fired at the target. The barrage density and individual accuracy are great enough to perfectly intercept up to twenty simultaneous nuclear torpedoes that travel through the ocean at Mach speeds using supercavitation.[10]

A special characteristic of the Gatling 033 is the fact that it's being used as a testbed in the Information Alliance's development of unmanned Objects. The Legitimacy Kingdom's Angelina List showed that current AIs are still very limited and cannot pilot an Object fighting at high speeds better than an Elite. However, the Information Alliance reached a simple solution. Instead of being completely unmanned, the Gatling 033 has both a strategic AI called Juliet and an Elite. While both Juliet and the Elite can pilot the Object on their own, to use the Gatling 033 at full specs requires Juliet to pilot and the Elite to deal with any mistakes or bugs that appear. Juliet's complete control mode is still in testing, so the odds of misfires and erroneous judgments are still high.[11] When not in combat, the processing power of the AI Juliet can be used to run generic large-scale simulations or to run a fully virtual idol show.[12]

The Gatling 033 shares a feature with other Information Alliance Objects; it has power outlets to allow its battalion to make use of spare energy while the Object is in the maintenance base since the JPlevelMHD reactors are more efficient when left powered on 24/7.[5] As with other Objects, Gatling 033 is equipped with ejection and self-destruct systems.[13]

Gatling 033 participated in a joint operation against the Oceanian dictatorship together with the Baby Magnum in Oceania.[14] When Milinda tried to answer Quenser Barbotage's call for reinforcements, the Gatling 033 blocked her way, using the excuse of stopping a rogue Elite from disobeying direct orders and causing collateral damage. Its Elite revealed that she was under orders to record the joint actions to investigate the technology of the Legitimacy Kingdom’s Object.[15]

The Gatling 033 participated in a battle with the Baby Magnum in Alaska over the remains of the Water Strider, but lost the battle due to the actions of Quenser Barbotage who managed to sneak into the cockpit and tricked its pilot into ejecting after incapacitating the Strategic AI.[13][16][17]

Following the loss of the Gatling 033 in Alaska, another project under construction was taken over to replace it, with rearrangements being made to produce an identical machine.[18][19]

The Gatling 033 was present at the exchange of Klondike between the world powers in the Alps. After Flide distorted Milinda Brantini's perception with the Mirror of Truth, the Gatling 033 engaged the attacking Baby Magnum.[20] The Object continued the battle under the control of the strategic AI while "Oh ho ho" met with a wounded Quenser. She later returned to the Gatling 033 and used it to help with Quenser's plan to rescue Milinda.[21]

The Gatling 033 was one of the playable Objects in an arcade one-on-one multiplayer action game with Objects created by the Information Alliance. It was the Object chosen by its actual Elite in her match against Milinda, who had chosen Baby Magnum. Both of them remained unaware of the true identity of their opponent.[22]

The Gatling 033 was one of the multiple Objects from the four global powers guarding the Technopics. Mariydi Whitewitch saw it while practicing for the second stage of the shootathlon.[23]

It's revealed that the Generation 0.5 developed by the Oceanian dictatorship had been based on a downgraded version of the design data of the Gatling 033, which had been given to them by the MIB.[24]

The Gatling 033 was one of the two Information Alliance Objects which participated in the Gigant Hustler, together with the ECM110. When the Mobius Infinity launched an attack which destroyed the Faith Organization's Objects, the Gatling 033 had to sacrifice one of its main cannons in order to survive. Not long afterwards, it turned towards the Baby Magnum, whose movements were disrupted due to a sudden water leak from an underground vein, engineered by Nyarlathotep.[25] As it moved in, with "Oh ho ho" taunting Milinda as she did so, the Baby Magnum used its secondary weapons to fill the ground below the Gatling 033 full of holes, knocking it off balance.[26]

The Gatling 033 continued its attack against the Baby Magnum, with "Oh ho ho" continuing to taunt Milinda, mentioning the 'reset button' they held with the ECM110.[7] Following the Mobius Infinity's destruction, the remaining enemy Objects sided with the Baby Magnum against the Gatling 033, forcing "Oh ho ho" to order the ECM110 to use their 'reset button' to end the battle by exposing its true nature to the rest of the world.[27]

The Gatling 033 is one of the shadows summoned by Hel in order to confront the heroes trying to stop her from killing herself while trying to save the sinners of Niflheim. 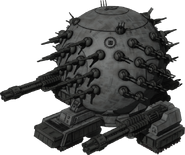 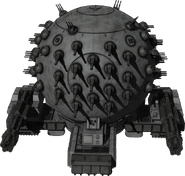 Front view of the Gatling 033

Bottom view of the Gatling 033

Gatling 033's specifications
Add a photo to this gallery

Retrieved from "https://heavyobject.fandom.com/wiki/Gatling_033?oldid=11170"
Community content is available under CC-BY-SA unless otherwise noted.